Discover the new range of stamps featuring iconic poses from the Justice League characters! Now available for purchase at https://stampcenter.com/portugal-2020-justice-league-superheroes-6v-sheet/

Fueled by his restored faith in humanity and inspired by Superman’s selfless acts, Bruce Wayne enlists the help of his newfound ally, Diana Prince, to face an even greater enemy. Together, Batman and Wonder Woman work quickly to nd and recruit a team of metahumans to stand against this newly awakened threat. Yet despite the formation of this unprecedented league of heroes — Batman, Wonder Woman, Aquaman, Cyborg and The Flash — it may already be too late to save the planet from an assault of catastrophic proportions.

The best known of all, Superman, is also the greatest idealist, representing the epitome of American utopianism in fighting for a free, fair and true society. Born on planet Krypton and gifted with colossal strength and resistance, he is known for his defense of the good side of human nature. And he does this both in his red cape and blue suit with an ‘S’ on the chest, and in his role as Clark Kent, newspaper reporter for the Daily Planet. What he can’t do is go anywhere near Kryptonite, a material that saps his strength.

His fame rivals that of Batman, the other persona of millionaire Bruce Wayne, whose parents’ tragic death led to a transmutation, both physical and mental, into a character inspired by a bat. Obsessed with eradicating crime in Gotham City, he makes use of his remarkable skills in martial arts, deduction and combat strategy, aided by the latest technology. The character also known as the “Dark Knight” only exhibits these qualities at night.

Born on the mythical island of Themyscira, Princess Diana acquired the extraordinary identity of Wonder Woman when she entered the human world. Her origin as an Amazon gives her an unusual capacity for the defense of truth and justice in a world full of opposing values. She alternates between being a pacifying spirit and a warrior, performing both roles with her incredible strength, remarkable combat skill, singular agility, magic weapons and healing powers.

Aquaman’s complex telepathic and submersion skills allow him to control the underwater kingdoms. Also known as “King of Atlantis”, the man born of a relationship between a queen of that mythical land and a lighthouse keeper, takes on the role of guardian of harmony beneath the oceans. But that doesn’t mean his in uence isn’t felt on the land as well.

The main characteristic of The Flash, alter ego of Barry Allen, a student at Central City University, is his incredible speed, a power which allows him to achieve wonders and help his partners from the Justice League. Great reason for him to play a central role in the struggle to keep society safe.

Another terrible mishap gave rise to Cyborg, part man, part machine, defender of innocents in danger. This bionic being, a reminiscence of the young Vic Stone, rescued from death by his scientist father, complements his strength with the ability to interact with the most complex computers, and also has a vast arsenal of weapons.

Only together can they defeat the worst enemies. After all, no one can save the world alone.

All six stamps and souvenir sheet are available now.

Buy this set now at: 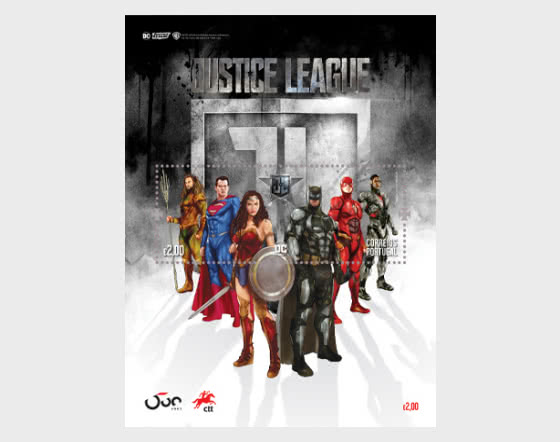