The life story of Mahatma Gandhi is one of heroic efforts to establish the values of Truth and Non-violence. Mohandas Karamchand Gandhi, popularly known as Mahatma Gandhi, ('Great Soul') was born on 2ndOct 1869 in Porbandar, Gujarat, India and is acknowledged as the father of the nation.

Mahatma Gandhi was a lawyer, a freedom fighter and an influential political leader who played the leading role in India's struggle for independence. Under his leadership the struggle for freedom in India was driven by principles of non-violence and truth and wherein millions of people demonstrated in a peaceful and non-violent manner known as Satyagraha. His unique ideology of truth and non-violence inspired many freedom fighters and political leaders around the world.

Mahatma Gandhi has left a lasting legacy and indelible mark on world history. His teachings and ideology continue to inspire millions even today. In 2007, the United Nations declared Mahatma Gandhi's birthday, 2nd of October, as the International Day of Non-Violence. His 150th Birth Anniversary is being celebrated across the world this year. 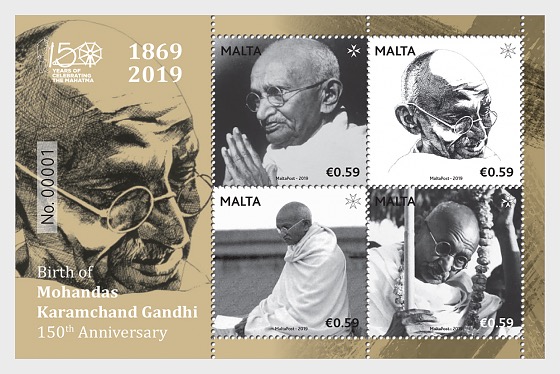 MSRP:
Now: $7.12
Was:
The postage stamp of the souvenir sheet depicts an Armenian Archimandrite (Vardapet), composer, singer, ethnomusicologist, musicologist and a teacher Komitas (1869-1935), Soghomon Soghomonyan. The...

MSRP:
Now: $6.31
Was:
About 250th Anniversary Birth Of Ludwig Van Beethoven 1770-2020Ludwig van Beethoven is acknowledged as one of the world's renowned pioneers in classical music of the 18th and 19th Century. Beethoven...